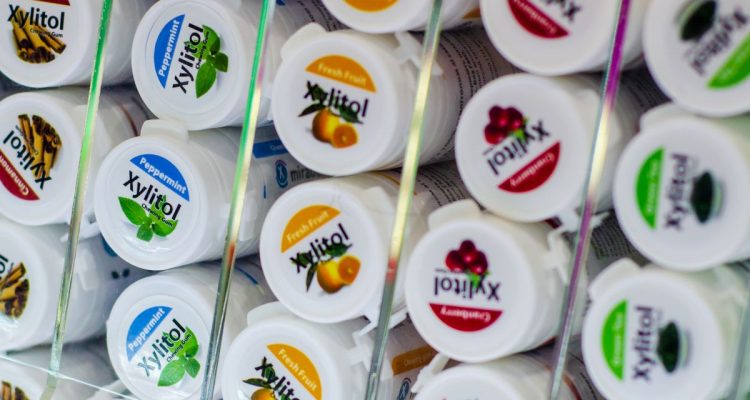 Chewing sugar-free gum (and that’s the crucial qualifier, it must be sugar-free!) may not be the first thing that springs to mind when you’re thinking about good dietary habits that benefit your teeth. But studies have shown that chewing sugar-free gum for 20 minutes after eating can prompt your mouth to produce more saliva, which helps neutralise decay-causing acid attacks.
Xylitol Chewing Gum uses a natural sweetener with widely recognised dental benefits, which means that it not only tastes great, but is proven to reduce plague, stop new plague formation and protect against tooth decay. With no sugar, no gluten, no lactose, no aspartame and a low GI (it is suitable for diabetics), this chewing gum comes in 6 exciting flavours, all of which are 100$ sweetened with natural xylitol and are 40% lower in calories that regular sugar. Xylitol Dental Gum is a great addition to the daily dental regime of children and adults. It is an easy way to fight plague and keep teeth and gums healthy. It is widely recommended by dental professionals.

A sweet, white substance which tastes like sugar. It has 40% fewer calories than sucrose and is diabetic friendly. It is organic and natural, it can be found in the fibres of many fruits and vegetables including corn, berries, mushrooms or the wood of trees such as the Birch. It is also produced naturally in small amounts by our bodies. This sweetener has the power to protect teeth.

WHAT DOES XYLITOL DO?

2 Way Action – rids the mouth of harmful bacteria AND promotes the growth of tooth-protective, non-acidic (“good”) bacteria. The harmful bacteria in the plaque biofilm metabolise sucrose and carbohydrates to grow and multiply. They can create sticky threads that allow them to attach to the tooth surface to form thick layers and acids that damage teeth. However, when plaque bacteria absorb xylitol, their ability to multiply, produce acids and stick to teeth is significantly reduced. Using Xylitol chewing gum means less plaque will form on teeth and eventually plaque bacteria becomes undetectable in the mouth. Xylitol also raises the pH of the mouth (makes it less acidic) and encourages mineral-rich saliva to flow into the mouth. This can protect and re-mineralize teeth by repairing the deep layers of enamel.

HOW DOES XYLITOL WORK?

A bacterial cell is composed primarily of a jelly substance called cytoplasm which is contained by the cell membranes. This portion of a cell surrounds a spaghetti pile of cellular DNA called nucleoid. When products with sugar or carbohydrates are consumed, sugar will dissolve in saliva and then be absorbed by bacteria in plaque on teeth. The sugar is absorbed into the cytoplasm layer and then transported to feed the cell with energy to reproduce and multiply. Xylitol is readily absorbed by plaque bacteria, where it travels into the cell cytoplasm. The difference is that the cell lacks the mechanism to generate energy from the xylitol to multiply and reproduce. Furthermore, the cell tries to expel the Xylitol and expends energy trying to push the Xylitol away and out of the cell. This process of using energy to no purpose is called a “futile cycle” and impedes the bacteria’s ability to stick to the teeth and produce damaging acid. Toxic and cavity-forming plaque bacteria die each time they are in contact with Xylitol. As harmful bacteria are cleaned away, the new Xylitol-resistant bacteria take their place. These new bacteria do not produce acids, do not damage teeth and also do not form sticky layers of plaque. These bacteria appear to form a protective coating over teeth, fighting off the intruding bacteria and protecting enamel from substances that may harm teeth.

WHY IS XYLITOL BETTER FOR TEETH THAN OTHER SUGARLESS SWEETENERS?

Xylitol is a small 5 carbon alcohol and it has completely different chemistry from other similar-sounding sweeteners found in other commercial products. Most sugarless sweeteners have large 6 carbon molecules, making them too big to penetrate the protoplasm of a bacteria cell. These sugarless sweeteners may not feed bacteria cells, but they don’t kill the cells like Xylitol does. Bacteria learn to process sorbitol, commonly found in commercial sugarless chewing gum, after about three exposures. Harmful bacteria cells are able to set up pathways that allow sorbitol to transport into the cytoplasm and provide the energy to the cell. Plaque bacteria use this energy from sorbitol to grow and multiply. This can lead to thicker plaque and may even give rise to acid reflux conditions in the throat and stomach.

THE BENEFITS OF XYLITOL

WHAT FLAVOURS IS THERE AVAILABLE? 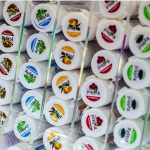 For the month of April, we’re offering a gap free examination, and a $199 clean and polish!

Offer valid until April 30th, new patients and any existing patients that have not been to the practice for over 12 months are eligible.
×
April Special

Book Your Appointment!
×
April Special
For the month of April, we’re offering a gap free examination, and a $199 clean and polish!

Offer valid until April 30th, new patients and any existing patients that have not been to the practice for over 12 months are eligible.